In order to know what to expect from KYMCO motorcycles and why they are as they are, it is necessary to understand the concept and philosophy of the company. Therefore, we suggest that you read the history of the factory KYMCO and know better the ideas behind this name.

The history of the name KYMCO begins in 1964 when Honda set up its own factory in Taiwan. Honda is probably the biggest name in the world of two-wheelers, and Taiwan is one of the five largest two-wheeler markets in the world, and hence the idea to start production in this promising country. By 1982, the factory was working as part of the Honda group. From that year, Kwang Yang Motor Co., which is the full name of KYMCO, became fully independent and started producing scooters and light motorcycles under the name KYMCO. Although the first decade and more products of the brand used legacy technology and design solutions from the era of labor under Honda, desire for improvement and expansion of its name brings them to improve and move away from the legacy model. As Taiwan is a large market, real KYMCO scooters proved to be extremely durable and economical so the success came quickly, and KYMCO expanded to Europe.

In the late eighties Europe recognized the brand as a low-overhead, high-quality product and its sales were growing to the point that by 1991 KYMCO established their branches throughout Europe. The success of the home market, where KYMCO almost two decades holds a whopping 40% market share, brought the money from which the KYMCO could invest in new models and technologies. At the beginning of the new millennium KYMCO besides quality, design and began to compete with the big names in the sector. Their sales only grew, and in 2008 KYMCO sales were just behind Honda and Yamaha in the world, a whopping 800,000 units. Fanatical dedication to work and training products and technologies has resulted in something truly special. The decades of serious investment in the sector of development and design of the sizable budget with strategic cooperation (since 2008) with BMW Motorrad set the KYMCO shoulder to shoulder with all the leading manufacturers of scooter. It seems that the technical cooperation with BMW was the spark that launched the KYMCO to a new level, and earned him the status of a major player on the world stage scooter.

True, KYMCO is not targeting the luxury and prestige, but also their scooters generally do not come to those for whom it is primarily a matter of prestige, but because their initial slogan and idea to give the best value for money, which has long since become accepted and confirmed all over the world. KYMCO in recent years offers fantastic technical solutions, and it became apparent that since 2010 and the first engine of the fifth generation (G5) KYMCO does not follow trends, but sets them.

Today KYMCO, with Japanese duo Honda and Yamaha is the most present brand in the world, and is sold in almost every country of the world. By the number of units sold it is regularly in the third position world wide. What separates KYMCO apart from others is by far the highest percentage of income invested in the development of new technologies. Such philosophy in the last decade led them to the fact that they are now one of the most respected names in the world of scooters and brand that technologically and qualitatively second to none.

Besides scooters, KYMCO is a serious player in the world and ATV vehicles, which have a wide range of high quality products ranked high, especially in the United States.

KYMCO in Montenegro has official representation since 2007. The first five years KYMCO products in Montenegro came through distributors from Serbia, and of the 2012 KYMCO representative office in our country is working directly with the manufacturer. 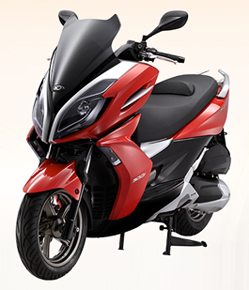